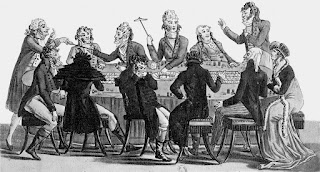 Readers of Regency romances will swiftly acknowledge the frequency with which these historical novels have scenes set in gaming clubs or gaming hells. The aristocracy, gentry, and common workers alike enjoyed gambling and did it with some frequency during the period. It has been hypothesized by Author Pitt in his master’s thesis on gambling during the Regency period, that gambling, and wagers in particular, were a means of fighting boredom. So there is little wonder that both gambling clubs and gambling hells were frequented often by people of all walks of life in Regency London. 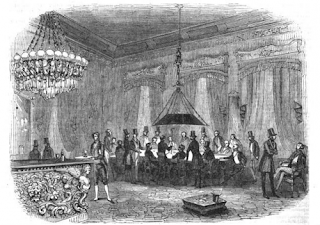 Gaming clubs were establishments frequented by the aristocracy, exclusive and with strict guidelines for behavior. The most exclusive of the time were The Cocoa Tree, White’s, Brook’s, and Almack’s. They were located in St. James and were considered the poshest of the gaming establishments. These were called “golden hells” and catered to the upper crust. These were in direct contrast to the gaming hells or “copper hells” patronized by the lower classes. The “golden hells” were just as apt to use gambling and outrageous wagers. The wagers were entered into a “betting book” so the participants didn’t forget the terms and amounts wagered. One remarkable wager found on the books states, “April 2nd, 1809. Mr. Howard bets Mr. Osbon Ten guineas that Lord Folkestone does not marry Miss Taylor before this day twelve month."

Gaming hells were for the lower, less genteel clientele. Their likes frequented clubs in a rougher part of London, which admitted people of all walks and stations of life, and both genders in some cases. Ladies were not allowed in the gambling establishments of the wealthy, as they were considered gentlemen’s clubs and off limits to ladies. 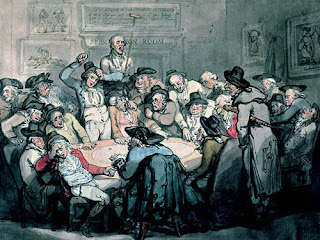 The types of games played were split down class lines as well. The aristocratic clubs played card games that required some skill to win, such as Whist (the forerunner of Bridge), piquet, Vignt-et-Un (which we know as 21), and Faro. Gaming in the “copper hells” relied mostly on games of chance, such as Hazard, a dice game that was an early form of Craps which required no skill and lots of luck.

Next month I will follow this post on gambling in general with a specific look at one of the more notorious gambling houses of the later Regency period: Crockford’s.

❌ Binary Option, Forex and their likes are a means of making money but it’s more like gambling. There are no sure means to guarantee that a person could make profit with them and that’s why it can also be reasoned to be scam. Let’s not forget that some individuals even give you 💯 % guarantee of making profits and end up running away with your money. The internet today is full of Binary Option Recovery Scam, you see so much testimonies been shared about how a firm or Company helped them recover what they lost to Binary Options. But believe it, it’s just a way to lure more people and end up scamming them.

❌ You might have also come across some individuals that say they will give you guarantee on successful trades but they only end up as SCAMMERS as well. You here them say stuffs like 200% guaranteed in just 2 weeks and when you go into trade with them, they start telling you to pay profits percentage before you can get your income. These are all liars please avoid them. But if you have been a victim of this guys, then you should contact FIRMWARE now‼️

✳️The big Question is “Can someone Recover their money lost to Binary Option and Scam⁉️
I will say yes, and will tell you how.

The only way to Recovery your money back is by hiring HACKERS to help you break into the Firms Database Security System using the information you provide them with, Extract your file and get back your money. It seems like a really impossible thing to do, I will tell you, it should be impossible, but with the use of specially designed softwares known to HACKERS and Authorities (such as The FBI, CIA e.t.c) it is possible and the only way to recover your money.

✅FIRMWARE are a group of hackers who use their hacking skill to hunt down SCAMMERS and help individuals recovery their money from Internet SCAMMERS.
We just need the contact details of the SCAMMERS and Paymnet Info and within 4-8 hours your money will be return to you.

✳️ You can contact us via the emails below-:
firmwarehacks@gmail.com

At the same time as I'm fascinated by this--that some of the games have survived albeit with name changes, I do wonder how many lives gambling has destroyed.

I am very satisfied with visiting here. Thank you for good content. And please visit my website as well.
Feel free to visit my web site 섯다

Like!! I blog quite often and I genuinely thank you for your information. The article has truly peaked my interest.
스포츠토토

I carry on listening to the news broadcast lecture about getting boundless online grant applications so I have been looking around for the most excellent site to get one. Could you advise me please, where could i acquire some?
일본야동

This is a nice information. I’ve bookmarked your site, and I’m adding your RSS feeds to my Google account to get updates instantly.
안전놀이터

HACK VANISH RECOVERED MY LOST 19.78 BITCOIN AND AIDED ME FIX MY CREDIT REPORT

In Dec, 2021, I invested the sum of 19.78 BTC with a fake blockchain impostor I met online, all the money I had saved up since 2014 got stolen just within a Month, my whole life almost crumbled, to crown it all my FICO score was so bad that I couldn't even afford securing a loan to help my kids, but everything became better after I joined a forum online where I met people testifying about HACK VANISH, a hacker who has been helping thousands of people all over the world. I decided to reach out to him via the following contact shared on the platform Text/Call/WhatsApp: + 1 (747) 293-8514, Email: hackvanish@ gmail. Com, they responded and requested for all necessary information needed to aid my JOB, to my greatest surprise my bitcoin was recovered and my credit report fixed, FICO score was boosted to 783 across all 3-credit bureau's, all negative items cleared just within 8 days. I can't stop expressing my profound gratitude to this great team of hackers, I strongly recommend them to anyone in need.

I am trying to find things to enhance my web site!I suppose its ok to use a few of your ideas!!
바카라사이트

Thanks for sharing this marvelous post. I m very pleased to read this article.
스포츠토토핫

Hello, i think that i saw you visited my site this i came to “return the favor”.I am trying to find things to
enhance my web site!I suppose its ok to use a few of your ideas!!
메이저토토사이트

Many thanks for the article, I have a lot of spray lining knowledge but always learn something new. Keep up the good work and thank you again. 먹튀사이트

This is the perfect post.안전놀이터 It helped me a lot. If you have time, I hope you come to my site and share your opinions. Have a nice day.

Great Article, I need to bookmark your page as soon as possible.