Joust in Time by Jenna Jaxon

Knights on horseback racing full tilt toward each other with lances fixed may be the most iconic image most of us have of the Medieval period, and for good reason.  Jousting was one of the most popular and dramatic entertainments people of all classes could enjoy at a time when life was uncertain.


Jousts were usually part of a tournament, held by royalty usually during the summer months of the year.  They were major events where knights were pitted against each other for honor, for glory, and for prize money.  They may had had their roots in Roman games at the Coliseum. 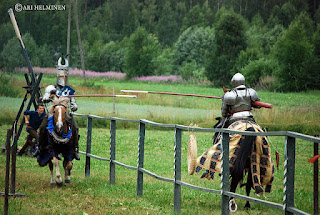 On the opening day of a tournament, which may have lasted from 3 to 5 days, there was a formal procession out to the lists (the barriers that defined the field of combat).  This procession could be quite elaborate.  In my medieval romance Time Enough to Love, the knights and their ladies are dressed in costumes as members of King Arthur’s Round Table and it was a great honor to be chosen to ride. I modeled this procession after an actual procession in which 25 ladies on horseback rode beside their knights who walked to the lists (at least a couple of miles) in full armor while tethered to the ladies by silver chains.  King Edward III, at whose court the major action of the first half of the book takes place, had in fact given a grand tournament in 1344, which gave me the idea for one in my book.

Once on the field, the spectators were seated in a grandstand called a berfrois, built a story above the lists. Knights were assigned to brightly colored tents called pavilions, where they rested, waited, and donned their armor, with assistance from their squire, in preparation for the joust.  As a side note, the armor typically worn weighed about 60 pounds, but was so well-articulated that the combatants had much more mobility than we would believe. 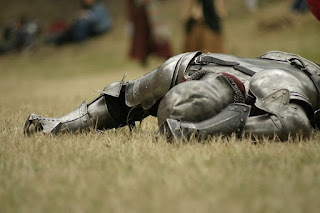 The horses used by knights were a special breed, called destriers, who could manage the great weight of knight and armor and still maneuver on the field.  The horses were draped with a cloth called a comparison that covered them from nose to tail, designed in the knight’s colors and emblazoned with his heraldic design.

Of course, as with any contact sport, the potential for injury and death in jousting was great. The most famous death occurred when King Henry II of France was killed when a lance broke on his helmet and a wooden splinter pierced his eye and brain.  Oddly enough, the almost exact same thing happened in January 2011 when a jousting re-enactor was killed when a lance splintered on his helmet and a large piece of it pierced his eye and brain.

With such a rich heritage of jousting, is it any wonder that I incorporated a joust and as many details of it as possible into Time Enough to Love?  You’ll find the procession—which becomes a serious conflict in the first part of the book—the joust itself, and a stunning injury that threatens the happiness of the hero and heroine.

If you love the color and pageantry of the Middle Ages, you’ll love Time Enough to Love.